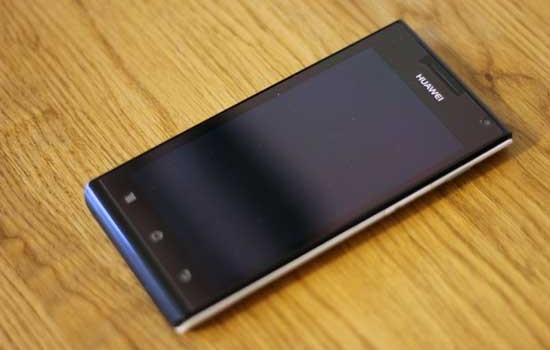 Summary: This phone has its flaws but punches well above its weight when you look at it's price. It appeals to a certain market and does everything your average user would need.

The Huawei Ascend P1 is not a new phone (as of the time of this review) but we felt that it was important to get some pointers down ready for the new Huawei Ascent P2 review which will hopefully be available on Gadget Mate soon. This Huawei Ascend P1 review was written after using it as a daily phone for one whole week. Ideally, we would usually use the phone for a month or so but the Ascend P2 should be with us to test any day.

We want to touch on most of the questions and issues which we get asked when reviewing a phone so we will go through things like battery life, the screen quality, performance, storage, limitations, camera, audio quality and it’s design. Firstly, however, we want to thank the team at Phones4u for providing us with the test handset. We can categorically state that although Phones4u provided this test phone, the review and these thoughts are ours – and ours alone. It goes without saying that we would never rate a phone, gadget or service higher in a review simply to appease the supplier of the sample.

It was pretty obvious when we opened the delivery box that Huawei were going for the Apple look with their packaging. A simple yet sleek white box with a glossy print of the phone on the front and glossy silver text stating the features on the side. Opening up the box showed even more similarities between the packaging and the accessories. The earphones are similar – white and sleek. The wall socket is identical apart from the logo and the quick start guide comes in the same style cardboard inner in which Apple use for the iPhone’s. There are some photos at the bottom of the page should you want to see the unboxing process. It has to be said however, that the accessories do look very decent and the quality seems fine.

Initial impressions were good. The phone fits nicely in the hand, your thumb (or my thumb at least!) could cover the entire screen without too many problems or without making it uncomfortable/awkward to hold. The phone felt light and sturdy-ish. It was fairly obvious that it wasn’t too strong though, it was very much what you could only describe as “plastic”; The entire back was nice looking but the plastic made it feel slightly cheap. However, this is a cheap phone, the only reason we expected a better build quality was because the spec list was so high for its price. I suppose this alone is a testament to the bang for buck that this phone provides.

The buttons felt firm, there were no issues there. As with most phone designs, there is a volume rocker switch on one side and the power button on the other. Below the buttons on one side is the expanded storage slot – for those who love carrying music, movies and data on their phone. The actual device itself looked quite nice. It is aesthetically pleasing without looking sexy or even current – sorry for sitting on the fence here but it really is just very… average.

At one stage Huawei claimed this was the thinnest smartphone on the market. Although they claimed this back when it was released, it is still thin. Very thin in-fact (6.7mm). Laid flat on a table alongside the Google (LG) Nexus 4 it is only a hairs-width fatter than the current Google flagship phone.

Not great, certainly not bad – hence the design score of 3 stars out of 5.

The phone comes with a 1.5Ghz dual core processor. It might no sound like much (especially considering new phones are sporting quad-core 1.9Ghz processors) but it actually performs admirably. There haven’t been many occasions when we felt it struggle or slow down, even when playing graphic-rich games. The home screen was buttery-smooth which is quite some feat considering it is not running Android Jelly Bean (which Google put every effort into making it run smoother than older Android versions) as was the app drawer. While installing new apps or updating current apps, the phone would show signs of lag but people even report this with the likes of the Samsung Galaxy S4 and the LG Google Nexus 4.

The phone was ran through AnTuTu and Quadrant benchmarks. The scores are as expected for the spec – maybe better than you would expect if you were to consider the price. 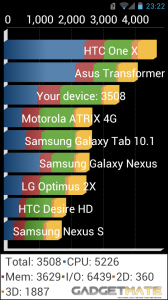 As you can see from the screenshots above, the Quadrant score of 3508 knocks it firmly above the Motorola ATRIX 4G and the Samsung Galaxy Nexus. In AnTuTu, it scored a respectable 7874 which again shows you what kind of bang to buck this phone provides. For a full comparison, head over to the AnTuTu website where you can find any phone you like and compare the scores.

There is very little I need to add to the GSMArena article on the same subject. The battery always performed very well, even with my obsession for using phones on full brightness. It would easily last a full day – and I don’t mean a full day at work like the Samsung Galaxy S4 or other newer and higher-end phones. In GSMArena’s tests it managed to last 12 hours and 30 minutes while in a call and 7 hours and 38 minutes during video playback. Pop over to GSMArena to see the full battery test.

Like so many current (or late 2012) Android model phones, the Ascend P1 comes with an 8mp lens. For some reason, in comparison to other 8mp phones, it just seems a little sharper in good light. The camera is good, although nothing special.

There are loads of filters to edit and play about with your photos which Huawei have added on-top of the generic Android 4.0 camera features. It is certainly worth noting that video also looks great and records in full 1080 HD.

The P1 has a 4.3″ 540 x 960 pixel Super AMOLED display. It sounds on paper like it should be fantastic, but it isn’t. That’s not to say that it’s not good, however. The colours are strong, vibrant and sharp. The screen is plenty bright and makes images look crisp and neat. The reason I wouldn’t call it “fantastic” is simply because of the speed of smartphones evolution. In the last year, screens – along with processors – have really taken big strides.

After spending 4 months with an LG Google Nexus 4, maybe I have been spoilt by a very (very, very, very) decent screen. Is it fair to compare this phone to a Nexus 4? Well I certainly can’t give them both a 5 out of 5 score for their screens because they simply aren’t on par with each-other.

No Android 4.2, a little plasticky, only 4GB of internal storage (although it does have a micro-SD slot).

All in all, it was actually a pleasure to write the Huawei Ascend P1 review. I obviously won’t be replacing my Nexus 4 with one any time soon but if any of my family or friends are after a budget but mid-end phone, I’ll be pointing them in this direction (especially considering that it can be had for free on a £25 p/m contract)… At least until I get my hands on the Ascend P2.