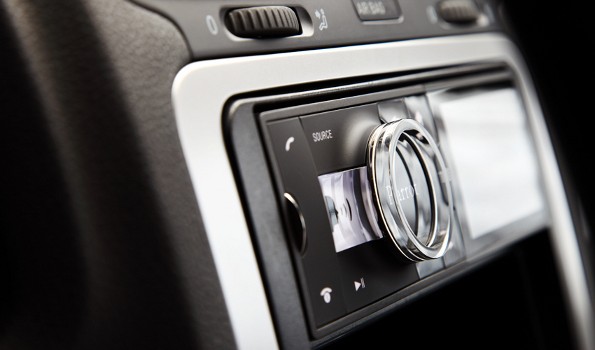 Summary: This is a feature rich stereo which promises so much and, more often than not, delivers, There are a few areas which let it down but in general it ticks all the boxes,

Before the current Asteroid becomes dated we thought we would share our very own Parrot Asteroid Review.

When Parrot announced their 2012 model “Asteroid” car stereo at CES in 2011, geeks and audio enthusiasts partook in a synchronised wetting of their boxer shorts.

The product is certainly not old technology yet so this review should remain current for a good few months. Even though it has officially been available in stores for around 12 months and the new 2014 models have been announced at this years CES, the features are still very much current.

Before we get our hands on the new 2014 models, we thought we would share our thoughts on the 2012 model so without further ado, here is our Parrot Asteroid Review:

The stereo comes in a strange sort of size. Don’t worry about the fitment – it is a standard single DIN size in terms of height and width, however, the unit is actually half as deep as normal car stereo’s. This is great if you have a tight space in behind your dash. One can only assume that the lack of a disc-drive saves plenty of space.

On first glance, the quality of the front of the stereo is as expected from a Parrot product – A-OK. Nothing spectacular but very well finished. Parrot have managed to add a touch of class to the aesthetics with a few Apple-esque finishes, adding some sparkle, shine & gloss.

This stereo really has it all. If you were to compare the feature list side-by-side to every other stereo in its price (apart from maybe those horrific Chinese import stereo’s from eBay) then it would come out as a very clear winner every time. Below is a summary of each feature and my opinions of its usefulness and any notes and issues I have faced in using the stereo.

Bluetooth - There are some good and bad points to be made here. The actual phone integration on this stereo is probably the best I have ever seen in a vehicle. The phone book view is crisp and clean, you can voice search for contacts, voice dial contacts and of course use the circular central knob to scroll down your contacts. The quality on the call both for the person in the car and for the person on the other end of the line is fantastic, thanks in main to the great Parrot Dual Mic. No complaints there at all.

However, I had some serious issues with A2DP music streaming. I tried streaming music from Google Play Music from 4 different Android devices and 2 iPhones (and iPhone 4 and an iPhone 5). The iPhone’s both struggled to connect at all and when they did finally connect, they disconnected frequently. The Android phones had similar issues but if they decided not to connect when you first get in the car then you had no chance in getting them to connect until you turned the car ignition off and left the vehicle off for a while. Other occasions the phone would connect fine – very odd.

I don’t know if these issues are simply a fault in the unit I received or if it paints a larger picture with Bluetooth connectivity issues. The last gripe I have with the A2DP functionality is how damn slow it is. Sometimes you can click the next track button on the stereo and be waiting for a good 30 seconds for the track to change.

iPod/iPhone Connection - As expected, the functionality was nice here. It is fantastic being able to tap the “voice” button on the front of the stereo and speak the name of a song, album or artist for it to play. Generally this function worked pretty well. The music interface is also nice and sleek. I only have two issues with iPod and iPhone connectivity: The first is that occasionally the iPod or iPhone (tested on an iPhone 4, iPhone 5 and an iPod Touch 3rd Gen) disconnects and then reconnects 20 seconds later.

The second issue is that if you have a large music collection – mine has roughly 10,000 songs – it can be quite hard to scroll from A to Z. It would be great if Parrot had thought about setting the “Next Track” and “Previous Track” buttons to move forwards and backwards through the alphabet.

CD Drive - Doh! Nothing to see here, move along. Do we care? Absolutely not!

Android Apps - The great thing about this stereo is that it runs a full version of Android! In theory you can install any application using its .APK installation file through a USB stick. As to whether the actual app you are installing will work or not is another story, I tried a fair few - including Spotify.

Unfortunately Spotify failed miserably. There are some cool apps that developers have got working nicely though. Head over to the Parrot forum for more info and tips.

As standard it comes with a few apps which you might find useful on first glance but in reality they are fairly pointless. The maps app is great visually but it gives no directions or voice feedback like a real sat-nav would. I found the most useful app was LiveRadio – once you connect your phone to the Parrot Asteroid for data sharing, you can access digital and internet radio stations… Just ensure you have an unlimited data pack. I managed to use a couple of GB’s in not many days at all.

Display – The unit actually features quite a nice display. Its not touch-screen but I kind of like that classic button feel on a car stereo. I find it distracting using a touch screen whilst driving. 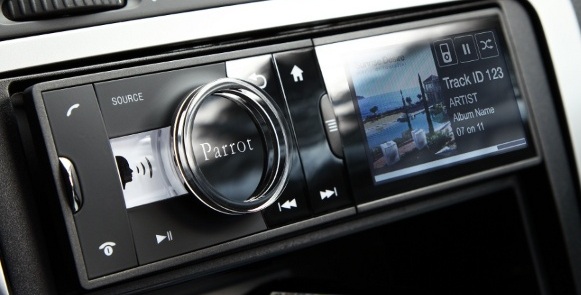 There is one small issue I have with the display though, it lacks customisation. On the Aline IDA-X305 you can change the interface colours to match your cars interior lighting. This would make a nice little feature on the Parrot Asteroid.

Other Features - You also get more USB ports than you could possibly fill, a 3.5mm aux input and a radio.  Most other standard features you tend to get on car stereos are also here, they just aren’t worth mentioning.

The sound quality was actually quite nice when compared to other units in its price point. My main head unit is a Pioneer P88RS, I have found it to be the nicest sounding car stereo that money can buy. Considering the difference in price I’d say that the Asteroid provides a decent quality of sound. The audio is fairly crisp and deep and to top it off, there are some quirky equaliser features which help getting the sound right. As with most digital music however, you often find this can vary from track to track.

At the time of writing this review, the product can be found for around £180. That is pretty impressive considering that when it was announced it had a retail price of £450. It sits firmly into the entry-mid level price point (At the current sale price at least) but offers a mid-high set of features. The build quality is easily consistent with a £300 product. Generally, this unit provides a fantastic bang-to-buck ratio.

Generally this is a nice unit which has been designed very well visually. It is pretty innovative too, probably the first of its kind – I’m sure there will be more to follow suite. If it wasnt for a few little software issues here and there I would have provided it with an extra star. This is a real gadget geek kind of product and gets our stamp of approval!