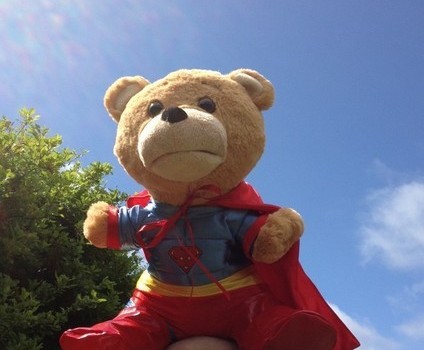 My bi-weekly trawl of Kickstarter pulled up some fascinating inventions (as always) but I was gob-smacked by one idea which might go down as one of my favourite Kickstarter projects of all time – possibly inspired by my childhood memories of the epic Teddy Ruxspin toy of the 80′s. When I watched the movie “Ted”, I couldn’t help but think that a talking teddy bear was an outrageous concept which surely wasn’t plausible using today’s technology. How wrong was I!

Simply called “Supertoy”, this talking teddy promises to be the best gadget of 2013/2014. It is a fully interactive toy which makes Siri and Google Now look like old technology.

As you can see from the promotional video, you can actually have a real conversation with this thing (I’m almost starting to feel insensitive for calling it a “thing” – it’s basically human, right? Like the film, A.I!). When I say “real conversation”, I mean REAL conversation.  He was developed with innovation in mind. It has not been scripted by a human in the sense that it has automated responses to specific questions or comments – this thing actually learns and understands!

Media attention around the worlds first super-toy is gathering pace. Recently, it was endorsed by Stephen Fry in the Telegraph, TechCrunch and Daily Mail to name just a few. This exposure has helped it hit its Kickstarter target of £30,000 with over 3 weeks to go and has 548 backers (orders!) including a couple for me.

Pop over to Kickstarter and back this thing – it really is a step forwards in technology. When mine (well, my nephews – really) arrives, I will be sure to add a review on Gadget Mate.